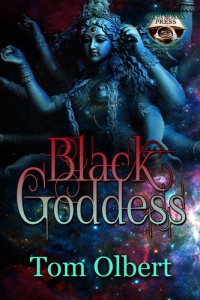 This is a chance to learn a bit more about Tom Olbert, author of Black Goddess.

I started writing as soon as I could put two words together. Writing was my earliest ambition. I just took to it as naturally as breathing.

What I love most about writing is having written, effectively. All writers know that. You have a thought, an idea inside you. If you can get it across in a way that reaches and holds the reader, then you’ve done it right. If it’s a spark that sets off a firestorm of imagination in the reader, even better.

The toughest thing about writing is bringing a character to life for the reader. Making the reader walk the story’s path in the character’s shoes and feel it. And, more importantly, care.

The writer I most admire is J.K. Rowling. That’s a common choice, especially among writers of fantasy or the paranormal, but Rowling’s is a success story that you have to admire. A working class single mother who wrote the world’s most famous novel on paper napkins in the café where she worked. Who could not fall in love with that story? It’s a tribute not only to Rowling herself, but to the power of the imagination to kindle belief in magic and change the world.

My lifelong hero, I’d have to say is my dad. He’s come a very long way. He’s done a lot on his own, but is the first to acknowledge that he had a lot of help along the way. Like all of us, he has his faults, but his honesty and his focused, inquisitive mind I’d say are his greatest strengths.

“The Gods Themselves” by Isaac Asimov
“Dune” by Frank Herbert
“Lord of the Rings” by J.R.R. Tolkien

Modern convenience I can’t live without:

The Internet has become indispensable to writers, it seems. No, Shakespeare and Hemingway didn’t need it, but to reach today’s audience, it seems you do. (Funny how the very existence of a technology seems to create the need for it.)

Advice to aspiring authors: Write what’s in you, and don’t stop.

Black Goddess is the story of Joshua Sinclair, a troubled gulf war vet who’s fallen into a black pit of despair and becomes obsessed with finding the heart of darkness. He volunteers for an illegal physics experiment that regresses him into primal energy and projects him backward through time, toward the very beginning of existence, at the Big Bang. As time splinters and reality warps around him again and again, Joshua finds himself pursued by lethal government agents and urged into a self-destructive quest for ultimate knowledge by a tortured scientist with inner demons of her own to battle. His chance meeting with a remarkable young woman named Lark Jeffries may be his one hope for salvation, or an impossible love that could doom them both, along with the rest of the universe.