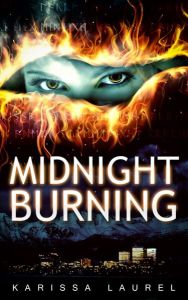 Midnight Burning, by Karissa Laurel, focuses on Solina Mundy’s search to find out more information about her twin brother’s murder. Solina and Mani grew up in a small town in the continental U.S., but he left to have a life of adventure in Alaska while she remained at home and worked in their family bakery. After a wolf-like beast apparently kills Mani, Solina heads out on her own adventure to learn the truth about his death. Is it an accident where an animal chooses man as its prey, or is it a murder in disguise?

Once in Alaska, Solina begins questioning not only the police officers investigating the case, but Mani’s friends as well. Solina feels there is more to the story, and not just because of the evasiveness of their replies. The night before Mani’s death she had a vivid dream of him being devoured by a wolf-like animal. Solina is stunned to learn that her own life is tied to Mani’s friends, his death, and the fate of the entire world. If she can’t learn to control her newfound gifts and keep her friends safe, a long-lost dominion over mortals will rise again, and everything she knows will fall into darkness.

I really enjoyed Midnight Burning. It is one of the more creative storylines I have seen in a long time dealing with ancient gods and mythology. What happens when the time of the gods has passed? How do these beings deal with endless life? (Just because they are not actively worshiped does not mean they die. They are immortal after all.) Would they be satisfied with their new lives, or would they do anything to try and regain their former status over humanity?

I like Laurel’s vision of how the gods integrate with mortals and the various types of immortality she presents in the narrative. Some of the gods are immortal from the time of their birth and some are a type of duality—both human and god at the same time. The latter type of entity is perpetually reborn into new human bodies, but that may take one lifetime or it may take a century or more.

This is not just about gods, warfare, and the end of the world. Midnight Burning focuses on the human aspect as well, and this is where Laurel truly shines. There are wonderful passages in the novel that deal with Solina’s emotional growth. She is the one who stayed behind; the one who played it safe while her brother went on an adventure. She reflects on this when boxing up the items in his apartment and seeing a journal entry about a care package she mailed him when he first moved to Alaska:

“I sent those fudge cookies in place of myself because I was too afraid to leave home, too afraid to disappoint my parents. I filled the emptiness by putting in more hours at the bakery, and Mom and Dad saw my work ethic as proof of my dedication to them and our “family business.” Really I was only digging myself into a deeper hole. Mani was almost right when he said nothing could get me to leave. Nothing short of his death.”

Solina’s need for answers about his death, and about her strange dreams, force her to confront her fears about leaving home and take action for the first time in her life. The theme of initiation—of a person leaving home to discover his/her own life’s journey—runs throughout the novel. It is Joseph Campbell’s “hero’s journey,” and the initiate that leaves home and hearth can never return from this experience unchanged.

Solina’s courage and resourcefulness are tested throughout the novel—whether at a rowdy bar when she asks drunk (and armed) patrons for information about her brother’s murder or when she trains in various fighting techniques with a group of Valkyries—and at each stage she manages to overcome her fear. In a discussion with one of her brother’s friends, Thorin, Solina says “I was a coward for most of my life. I have since gotten over it,” and the reader believes her statement. Her actions prove her “hero’s journey” has been a success as far as her emotional development. By the end she is willing to face down any type of danger to avenge Mani’s death.

But there is still that level of uncertainty in the narrative that Laurel maintains throughout the novel. These are gods walking the earth, with all the powers and abilities that this implies, and Solina has to deal with them in an all-too human body. As Thorin reminds her, she is fragile when compared to the gods: “ephemeral, insubstantial, and so easily smothered.”

Midnight Burning is a novel I heartily recommend. It is a five-star read that will keep any fan of fantasy enthralled. There is enough mystery in the storyline for it to be a “page-turner” and enough humor to keep it from being too intense. I actually read the novel twice over the last few days—once for this review and once just to enjoy the story. The ending is open enough to include sequels and I certainly hope I will be able to visit this story world again.