Fellow author Sara Daniel takes over my blog today to discuss an author’s dilemma–should an author play favorites?  Take it away Sara–Chris

With the reminder that every child is different, parents are often admonished not to play favorites. The same advice can often be applied to an author’s books. Each book is different and develops in a slightly different way. Sure, because they’re part of the same family (i.e. written by the same author), they share certain characteristics. But no matter how equally the author approaches them, they each turn out a little bit differently.

There’s the book that’s so fun and interesting that you’re sucked into the world and the characters. Before you know it, you’re writing a series.

There’s the book where you think you’re doing everything right, but nothing’s working out until you chuck the original premise (and the hero!) and start over.

Then comes the book where you feel like you finally got it right and you know what you’re doing, but you had to work hard to get there.

Oh, and surprise! You’re having twins…er, I mean, another book!

Then comes the book that starts out solid, then has a major teenage rebellion, then settles down and becomes a good, upstanding adult.

The sixth and final book, One Night with his Wife, is my pride and joy. No matter how much I’m not supposed to have a favorite, I’m having a hard time being impartial. This is my “miracle baby,” the story that came out exactly right the first time with characters who took on a life of their own and lodged themselves—and their emotional journey—in my heart.

I hope you enjoy Luke and Rosalind’s story as much as I enjoyed writing it. If you’ve been with me from the beginning, I’d love to hear which book is your favorite. If this is your first book in the series, welcome! The books can be read in any order, and you’ll find special appearances by familiar characters along the way.

One Night with His Wife 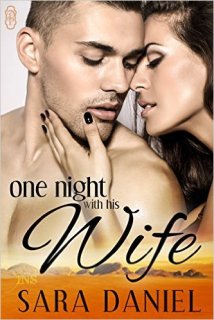 After a grenade took Marine Luke Cox’s leg and ends his career, he cuts ties with his wife to free her from the burden he’d become. On the day his divorce is to be finalized, he travels to meet a woman for a 1 Night Stand date—a woman who doesn’t care about his missing leg or his sudden wealth from a business venture. However, things don’t go as planned, and when he arrives for his date, he’s still legally married.

Rosalind Cox tends to the horses on her cousin’s ranch resort, her love for the animals the only thing keeping her going since her husband turned his back on her. When he appears at her stables, all the longing and rising hope is crushed by the realization he’s only sought her out to gain his freedom.

She’ll give him what he wants, but she can’t resist taking one last kiss for herself. The kiss reopens emotions and attraction that neither can deny. To give in will only complicate the tangle as they try to unwind their lives. But even though Rosalind doesn’t care about Luke’s missing leg or his money, as long as he refuses to accept himself as whole, one night with his wife will be his last.

2 thoughts on “The Author’s Dilemma by Sara Daniel”