Eris Field joins me in the kitchen today with her traditional recipe for manti. Take it away Eris!

When I was a young bride, I very much wanted to please my handsome Turkish husband by making manti, a meat-filled dumpling dish he reminisced about with a look of bliss. I studied Turkish cookbooks, looking for the magic instructions, and found a complicated six step recipe that began with making a volcano shape pile of flour on the table, putting eggs, salt, and water in the crater, and then kneading until it reached the right stage of elasticity. A sticky mess forced me to give up. Then one wonderful day I was invited to join a group of Turkish women who were gathering at the home of one of them to make manti. They explained that making manti was a process shared by family or friends. It is not a solitary undertaking.

Working together, they made the dough and let it rest under a cloth while they made the filling—a mixture of ground lamb, grated onion, parsley, salt and pepper that was also kneaded.

Next, a huge container of thick yogurt was set out to come to room temperature before crushed cloves of garlic were stirred in. Butter was cut up and placed into a small sauce pan where it was melted to serve as the topping with dried mint leaves added at the last moment. Some of the women said that, in their families, they also made a spicy tomato and olive oil topping.

Without missing a beat in the conversation about weddings, births, illnesses, jobs, children, and families, the women rolled out the dough to paper thinness, cut it into one inch squares, put a small amount of meat mixture in the center and then, with flying fingers, pinched the edges closed and finished with a distinctive twist handed down through generations. They boiled the little packets of goodness for 20 minutes. After the packets were drained, they were put in a mammoth bowl. Yogurt was smoothed over them and a river of melted butter with its flotsam of dry mint leaves drizzled on top. After I tasted it, I understood my husband’s love affair with manti. It has all—the robust sustenance of the meat-filled pasta, the velvety smoothness of the yogurt with a tangy lash from the garlic, and the sinful seductiveness of melted butter with a rejuvenating hint of innocent mint.

There are different recipes for manti from all over the caucuses and Middle East, but it is hard to gather a roomful of knowledgeable women to make manti and so I am offering a short-cut and hope they will forgive me. 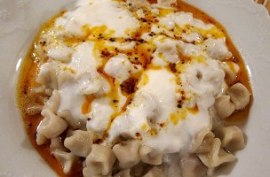 Bring water to a boil in a large pot. Add salt and ravioli. Cook until done (cooking time will vary and is usually noted on the package). Drain, return the ravioli to the pot and then cover to keep warm.
Melt butter in a small pot over low heat. Stir in paprika and dried mint. Keep warm.
Pour the yogurt into another bowl and mix until smooth. Stir in the garlic.
Carefully place ravioli into a large serving bowl. Spoon on the yogurt across the top and gently stir. Drizzle butter over the mixture and serve.

Here is a glimpse at the novel that features Manti. 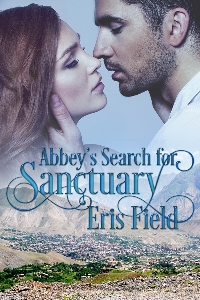 Honor killings aren’t common in Buffalo, NY. But Turkish-American nurse Abbey knows she must protect her dead sister’s infant daughter, Jenny. Abbey’s sister was murdered by her Muslim husband for leaving him when she learned his mother would perform the cruel ritual of female circumcision on Jenny.

Once a fighter and medic with the Kurdish forces in Iraq, Rami now works with the refugees in Buffalo. Shunned by his grandfather for failing to demand retribution when his arranged marriage failed, Rami has mastered the art of avoiding emotional attachments. That is until he meets Abbey.

Warning Abbey that honor killings are family affairs and she and Jenny are in danger, Rami offers her a way out: a marriage of convenience and a safe place to live–his homeland, Kurdistan where they’ll be protected by the clan.

Abbey has vowed to do what it takes to protect Jenny. Can she face going back to the world of her childhood, a world of headscarves and submission, a world she escaped once? 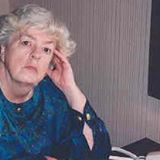 Eris Field was born in the Green Mountains of Vermont—Jericho, Vermont to be precise—close by the home of Wilson Bentley (aka Snowflake Bentley), the first person in the world to photograph snowflakes. She learned from her Vermont neighbors that pursuit of one’s dream is a worthwhile life goal.

As a seventeen year old student nurse at Albany Hospital, Eris met a Turkish surgical intern who told her fascinating stories about the history of Turkey, the loss of the Ottoman Empire, and forced population exchanges. After they married and moved to Buffalo, Eris worked as a nurse at Children’s Hospital and at Roswell Park Cancer Institute.

Eris now writes novels, usually international, contemporary romances. Her interest in history and her experience in psychiatry often play a part in her stories. She is a member of the Romance Writers of America and the Western New York Romance Writers. In addition to writing, Eris’s interests include: Prevention of Psychiatric Disorders; Eradicating Honor Killings, supporting the Crossroads Springs Orphanage in Kenya for children orphaned by AIDS, and learning more about Turkey, Cyprus, and Kurdistan.

One thought on “Manti by Eris Field”