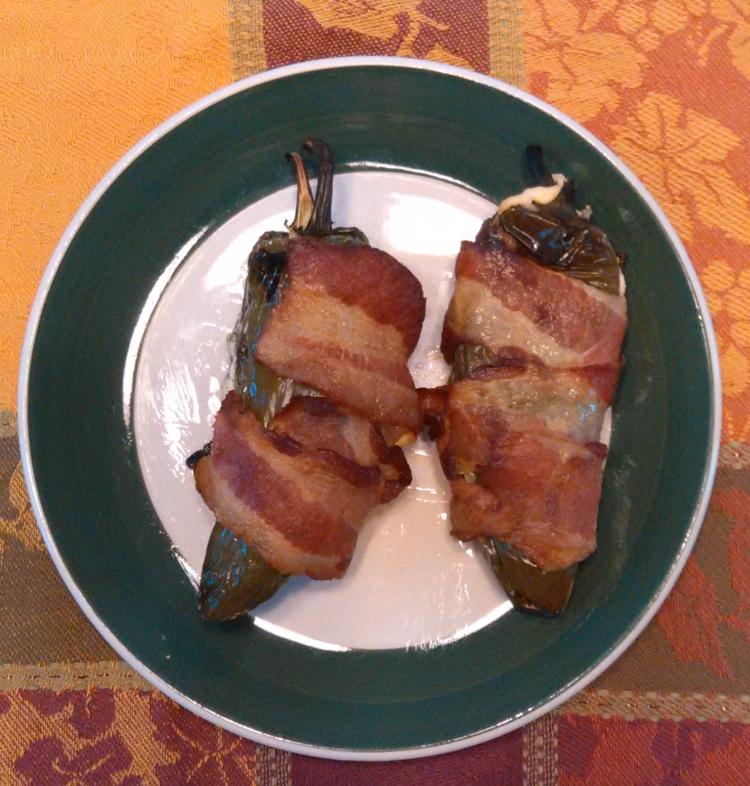 My family loves anything with bacon! The jalapeño peppers are an added bonus.
Ingredients:
Materials:
Directions:
1.  Preheat oven 400°.  Line a baking sheet with foil and place a cooling rack on top of the foil.  Spray the rack with cooking spray.
2.  In a medium bowl mix your cream cheese and cheddar cheese together and then add the chives or green onion.
3.  While wearing your disposable kitchen gloves, slice the peppers in half lengthwise (keeping the stem intact) and remove all the seeds and membranes of the pepper which contain the heat.  Keeping the gloves on, fill each pepper half with the mixture and put the halves back together.  Wrap each pepper with a slice of bacon so that it covers the pepper.
4.  Arrange bacon wrapped peppers, seam side down, on the cooling rack.
5.  Bake until bacon is crispy about 30 minutes.  Turn half way through to get both sides crispy.  The broiler can be turned on the last few minutes to make it even crisper.  Can be served with Ranch dressing if desired.

While you enjoy dinner, take a peek at Starter Zone, the first book of my new YA/LitRPG series, The Revelation Chronicles. 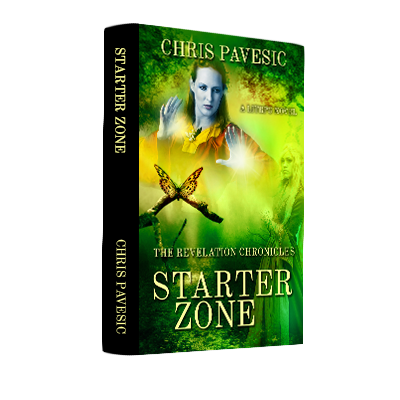 When hydrologists inscribe the consciousness of a human mind onto a single drop of water, a Revelation sweeps the land. The wealthy race to upload their minds into self-contained virtual realities nicknamed Aquariums. In these containers people achieve every hope, dream, and desire. But governments wage war for control of the technology. Terrorist attacks cause massive destruction. The Aquariums fail. Inscribed human minds leech into the water cycle, wreaking havoc.

Street gangs rule the cities in the three years since the fall of civilization. Sixteen-year-old Cami and her younger sister Alby struggle to survive. Every drop of untreated water puts their lives in peril. Caught and imprisoned by soldiers who plan to sell them into slavery, Cami will do anything to escape and rescue her sister. Even if it means leaving the real word for a life in the realms, a new game-like reality created by the hydrologists for the chosen few.

But life in the realms isn’t as simple as it seems. Magic, combat, gear scores, quests, and dungeons are all puzzles to be solved as the sisters navigate their new surroundings. And they encounter more dangerous enemies than any they faced in the real world.

Time to play the game.