Purchase from AmazonAdd to Your Shelf on Goodreads

About the Shadow Walker Box Set: 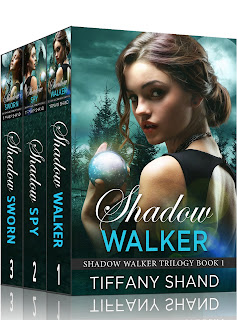 After her enforcer teammates are killed in a bust gone wrong, Denai witch Charlie McCray struggles to carry on working the job without them. Using her gift of communicating with the dead, she’s determined to get justice and find those responsible no matter what. But her only clue to go on is a mysterious orb with a deadly reputation that everyone wants to get their hands on.

The only one who may be able to help her figure out their deaths, and the connection to the orb is the dark and sexy demon from her past. Convinced she’s his life mate, to her denial, Charlie isn’t happy to see him again. Can they really work together as partners to track down the truth whilst ignoring the ever-growing attraction between them?

The walls trembled, sending dust flying through the air.

“What was that?” Charlie frowned, casting her senses out.

Irina’s azure eyes widened in shock. “We’re under attack. Hurry, we must…”

Light blurred as Myles Goodridge shimmered in beside them.

Oh shit! Charlie raised her hand, blasting him with a bolt of blue lightning. Hell, at least that’s one demon power I can kind of control.

He raised his hand and it fizzled out.

Well, mummy dearest. You did a lousy job teaching me that. She gritted her teeth.

Myles raised his hand, sending Irina staggering backwards, her body flicking in and out of existence. “You’re the one I came for,” he said to Charlie.

Charlie grinned. “Good, I need some fun after being stuck in this place so long.” She flew at him.

He fazed, her hand passing right through his body when she tried to hit him, his own hand solidified as he punched her in the stomach. “Don’t think any realm is free from me. I can walk between worlds as easily as breathing.”

Charlie grunted from the blow, then fazed out as he fired a bolt at her.

He wanted one thing — the Srimtar. An ancient orb with immense power that had unknown abilities. As the orb’s guardian, she knew she could never let her him get his hands on it.

She blocked his next blow. Goddess, this guy was stronger and much more well-versed in his powers than her. Where was the so-called knowledge Irina kept harping on about? How could she stop him?

She couldn’t outmatch him in strength but there was one place she could be stronger. One place only she could enter, her space between worlds. Light blurred around her as she started to shimmer and the room around her faded, replaced by glowing purple walls that shimmered like mist as she reappeared in her secret place.

The small opaque orb sat on the table made from the same misty substance. It burned bright red as it did when it sensed a threat.

Charlie grabbed it, clutching it in her palm. She let out a breath she didn’t know she’d been holding. She hated running away but the orb was her number one priority. In the wrong hands, it could kill hundreds, even thousands, of people since it only seemed to let her touch her. Anyone else who tried using it ended up dead. 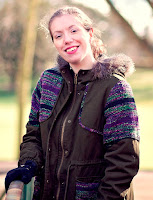 ‘writing is an exploration. You start from nothing and learn as you go’

Tiffany Shand is a writing mentor, professionally trained copy editor and copy writer who has been writing stories for as long as she can remember. Born in East Anglia, Tiffany still lives in the area, constantly guarding her work space from the two cats which she shares her home with.

She began using her pets as a writing inspiration when she was a child, before moving on to write her first novel after successful completion of a creative writing course. Nowadays, Tiffany writes urban fantasy and paranormal romance, as well as nonfiction books for other writers, all available through Amazon and on her own website.

Tiffany’s favourite quote is ‘writing is an exploration. You start from nothing and learn as you go’ and it is armed with this that she hopes to be able to help, inspire and mentor many more aspiring authors.

When she has time to unwind, Tiffany enjoys photography, reading and watching endless box sets. She also loves to get out and visit the vast number of castles and historic houses that England has to offer.

You can contact Tiffany Shand, or just see what she is writing about at: