Welcome to the virtual book tour for
Unreachable Skies by Karen McCreedy.

In a world where it is normal to fly, what happens when you can’t?
About Unreachable Skies:
When a plague kills half the Drax population, and leaves the hatchlings of the survivors with a terrible deformity – no wings – suspicion and prejudice follow. Continuously harassed by raids from their traditional enemies, the Koth, the Drax are looking for someone, or something, to blame.
Zarda, an apprentice Fate-seer, is new to her role and unsure of her own abilities; but the death of her teacher sees her summoned by the Drax Prime, Kalis, when his heir, Dru, emerges from his shell without wings.
A vision that Dru will one day defeat the Koth is enough to keep him and the other wingless hatchlings alive – for a time. Half-trained, clumsy, and full of self-doubt, Zarda must train Dru to one day fulfil the destiny she has foreseen for him, even if it is quickly becoming clear that the Prime’s favourite adviser, Fazak, is not only plotting against the wingless, but is gaining more of Kalis’ trust by the day.
Efforts to fight prejudice and superstition are certain to lead to death for some and exile for others; while Zarda’s own journey to understanding her role in events may lead her to abandon all tradition in order to protect her peoples’ future.

“So tell me, apprentice,” he said, indicating the walls and nest with a circling finger, “is everything as it should be?”

Vizan had been responsible for the arrangements in the chamber, so there was no reason for doubt. Was Kalis testing me, or was his question no more than the natural anxiety of any sire about to see his first offspring hatch? Either way, a swift glance around and a brief sniff assured me that all the traditions had been properly observed: sweet-smelling avalox had been woven into the nest, lit torches in ancient copper brackets spiralled up the otherwise-unadorned walls, winding in overhead to the ceiling’s central point. A single candle had been lit to mark the time, and a shard of Kalis’ own shell, brought from the Egg Vault, had been placed in the nest itself.

I flicked an ear to acknowledge Limar, the nest-nurse, who was sitting on the raised nesting platform, stroking the coarse purple shell and murmuring encouragement to the occupant within, then turned my attention back to Kalis. “It’s perfect, Lord,” I assured him with a little dip of my head. “All that’s necessary now are the traditional prayers.”

I hoped that my doubt wasn’t too tangible. “Of course. Vizan is an excellent teacher.” I stepped closer to the nest and spiralled a paw across the front of my tunic. Spiral give me strength! I thought. Aloud, I said: “Great Spiral, look kindly on this hatchling. Give it the strength, the wisdom, and the stamina to learn well and fly far, as its ancestors have done. Let it be guided by your lights and look to your pattern for understanding and enlightenment. Let it grow to be a good and true leader, as its forebears have before it. So it has always been.”

“May it so remain.” No sooner had Kalis and Varna spoken the refrain and spiralled their paws over their tunics than a crack split the egg’s shell with a faint tearing sound. Around me, the odour of anticipation and excitement grew stronger. 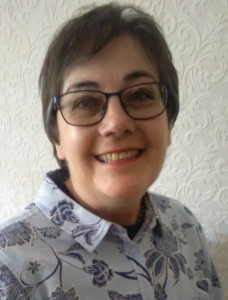 Brought up in Staffordshire, England, Karen McCreedy now lives in West Sussex where she recently retired from the University of Chichester. She has written articles on films and British history for a number of British magazines including ‘Yours’, ‘Classic Television’, and ‘Best of British’.
Karen has had a number of short stories published in various anthologies. She also won second prize in Writers’ News magazine’s ‘Comeuppance’ competition in 2014 with her short story ‘Hero’.
‘Unreachable Skies’ is her first novel.