Acclaimed journalist Anne Montgomery weaves her latest mystery/suspense novel around one of the most enduring cold case crimes in Arizona history.

Following in-depth research into the deadly 1995 cold-case derailment of an Amtrak train in the wilds of the Arizona desert, novelist Anne Montgomery penned the story of Jason Ramm, a broken former Special Forces sniper, and Kelly, the lonely pregnant teen who appears to be his salvation in the 2018 suspenseful mystery A Light in the Desert releasing November 6, 2018 from Treehouse Publishing Group.

Set in Hyder, Arizona, Montgomery’s A Light in the Desert details the crumbling world of a former soldier whose crimes assault his conscience and an isolated child who, in the guise of love, falls victim to abuse. Is Ramm her savior or something more insidious? Montgomery suffuses the tale with heartbreaking melancholy, both from the point of view of a rejected child who understands little of the outside world and the assassin who’s descending into the grips of an odd mental illness, the Jerusalem Syndrome, that threatens to replace who he is with something else.

A former ESPN sportscaster, Montgomery, a foster mom to three sons, works in Arizona as a football referee and high school teacher at a Title I school where many of her students live in poverty, some are abused, and others are relegated to foster care. On why she wrote the book, Montgomery says, “I have seen the suffering of neglected and abused children first-hand. Often, their voices go unheard. I believe child abuse needs to be a topic we address with ardent regularity, loudly and often, so that someday, perhaps, this cruelty can be relegated to the past.”

This novel is a definite must read! 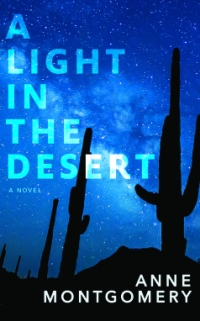 As a Vietnam veteran and former Special Forces sniper descends into the throes of mental illness, he latches onto a lonely pregnant teenager and a group of Pentecostal zealots – the Children of Light – who have been waiting over thirty years in the Arizona desert for Armageddon.

When the Amtrak Sunset Limited, a passenger train en route to Los Angeles, is derailed in their midst in a deadly act of sabotage, their lives are thrown into turmoil as local and state police, FBI investigators, and a horde of reporters arrive on the scene. As the search for the saboteurs heats up and the authorities question members of the cult, they uncover more questions than answers.

And then the girl vanishes. As the sniper struggles to maintain his sanity, a child is about to be born deep in the wilderness.

Anne Montgomery has worked as a television sportscaster, newspaper and magazine writer, teacher, amateur baseball umpire, and high school football referee. She worked at WRBL‐TV in Columbus, Georgia, WROC‐TV in Rochester, New York, KTSP‐TV in Phoenix, Arizona, ESPN in Bristol, Connecticut, where she anchored the Emmy and ACE award‐winning SportsCenter, and ASPN-TV as the studio host for the NBA’s Phoenix Suns. Montgomery has been a freelance and staff writer for six publications, writing sports, features, movie reviews, and archeological pieces.

When she can, Anne indulges in her passions: rock collecting, scuba diving, football refereeing, and playing her guitar.