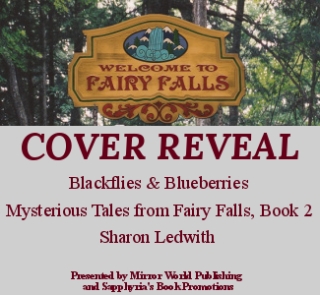 Mirror World Publishing presents the cover reveal for Blackflies and Blueberries
(Mysterious Tales from Fairy Falls, #2) by Sharon Ledwith!
About Blackflies and Blueberries:
The only witness left to testify against an unsolved crime in Fairy Falls isn’t a person…
City born and bred, Hart Stewart possesses the gift of psychometry—the psychic ability to discover facts about an event or person by touching inanimate objects associated with them. Since his mother’s death, seventeen-year-old Hart has endured homelessness, and has learned ways to keep his illiteracy under wraps. He eventually learns of a great-aunt living in Fairy Falls, and decides to leave the only life he’s ever known for an uncertain future.
Diana MacGregor lives in Fairy Falls. Her mother was a victim of a senseless murder. Only Diana’s unanswered questions and her grief keeps her going, until Hart finds her mother’s lost ring and becomes a witness to her murder.
Through Hart’s psychic power, Diana gains hope for justice. Their investigation leads them into the corrupt world threatening Fairy Falls. To secure the town’s future, Hart and Diana must join forces to uncover the shocking truth, or they risk losing the true essence of Fairy Falls forever.
Blackflies and Blueberries Cover:

5 thoughts on “Blackflies and Blueberries by Sharon Ledwith”